Our second Brighton-based mini skein donating yarnie is The Uncommon Thread. Ce's yarns are spectacular, complex color treats. Those of you who go to loop on a regular basis may have seen their collection of The Uncommon Thread's yarns - every time I go in I find myself getting stuck petting the skeins for untold minutes. 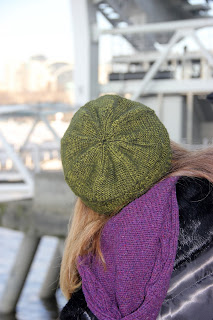 We are so excited to have The Uncommon Thread on board as a sponsor, and for those of you unfamiliar with this indie dyer, we hope we've introduced you to a new addiction! You can find The Uncommon Thread on their website, on Ravelry, on Facebook and on Twitter. Thanks so much Ce for your generosity!
Posted by GLYC at 13:00